NuRealty Advisors Inc. is proud to announce the Sale of both:
For further information, please contact NuRealty at Team@NuRealtyAdvisors.com
Learn More 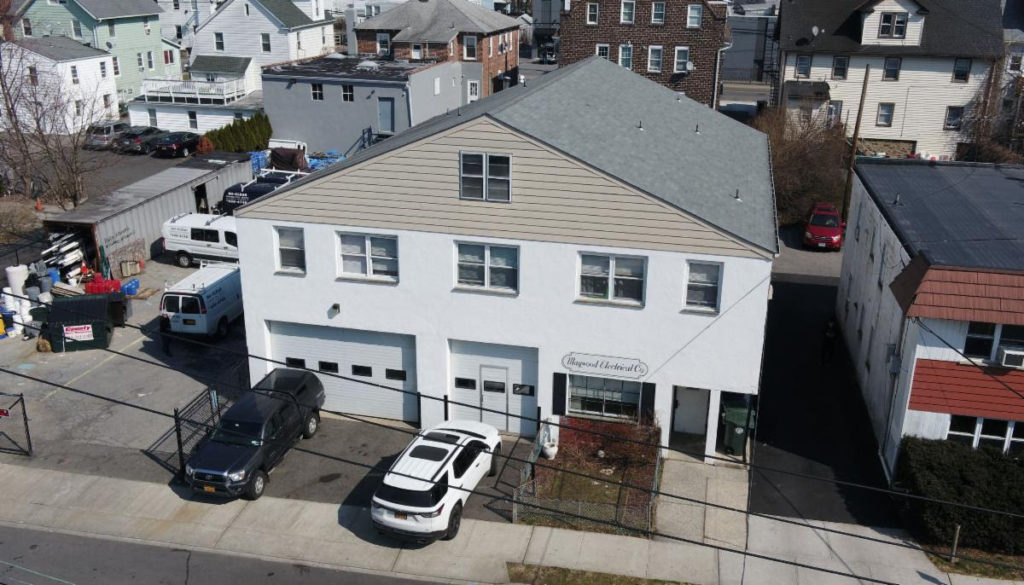 The property offered one Commercial and four Residential Units. Family Owned for over 30 Years. 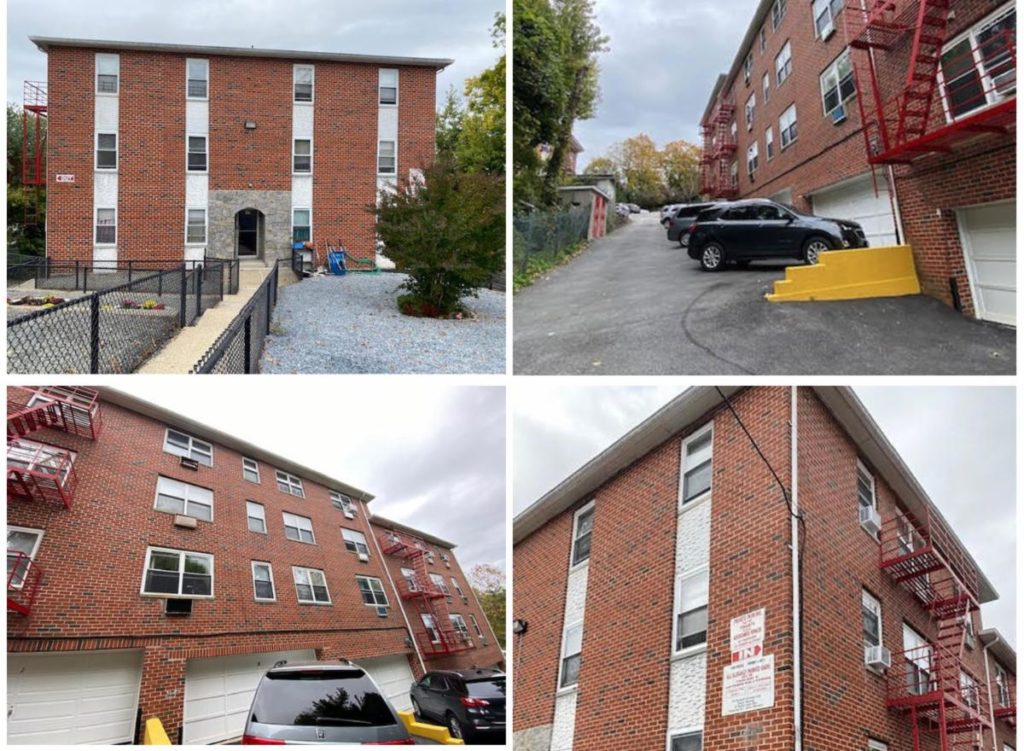 The property is comprised of 22 Units with indoor & outdoor parking and is situated in a residential neighborhood in northern Yonkers.
For information regarding other opportunities of properties for sale, contact NuRealty at Team@NuRealtyAdvisors.com
Learn More 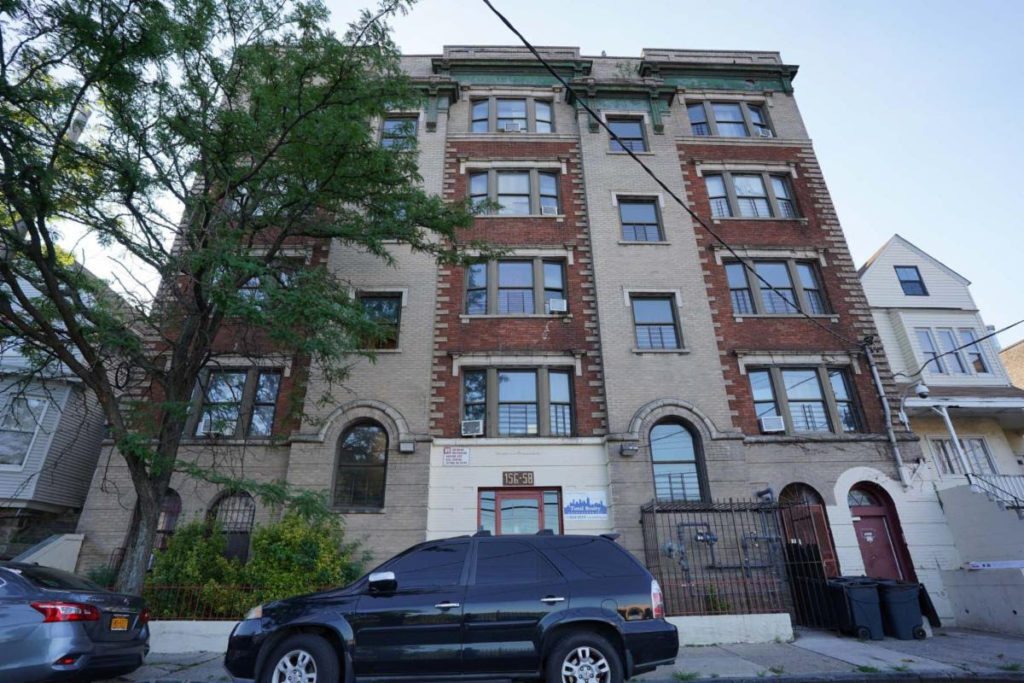 YONKERS, NY — December 3, 2021 — NuRealty Advisors Inc. closed on the sale of a 26 Units Multifamily dwelling located at 156-158 Woodworth Avenue, Yonkers NY 10701. The property is situated within a half mile from Yonkers Metro North

The Seller’s Name is 156 Woodworth LLC
The Buyer’s Name is 156 Woodworth Properties, LLC
Purchase Price:  $4,045,000
Brokers:  Michael Nukho, Principal Broker, and Lukasz Przybylek, Associate Broker
Closing Date:  November 17, 2021
Note: This was a most opportunistic transaction which provided the buyer with rental growth in a burgeoning Yonkers Market adjacent to development activity by the waterfront.
Learn More 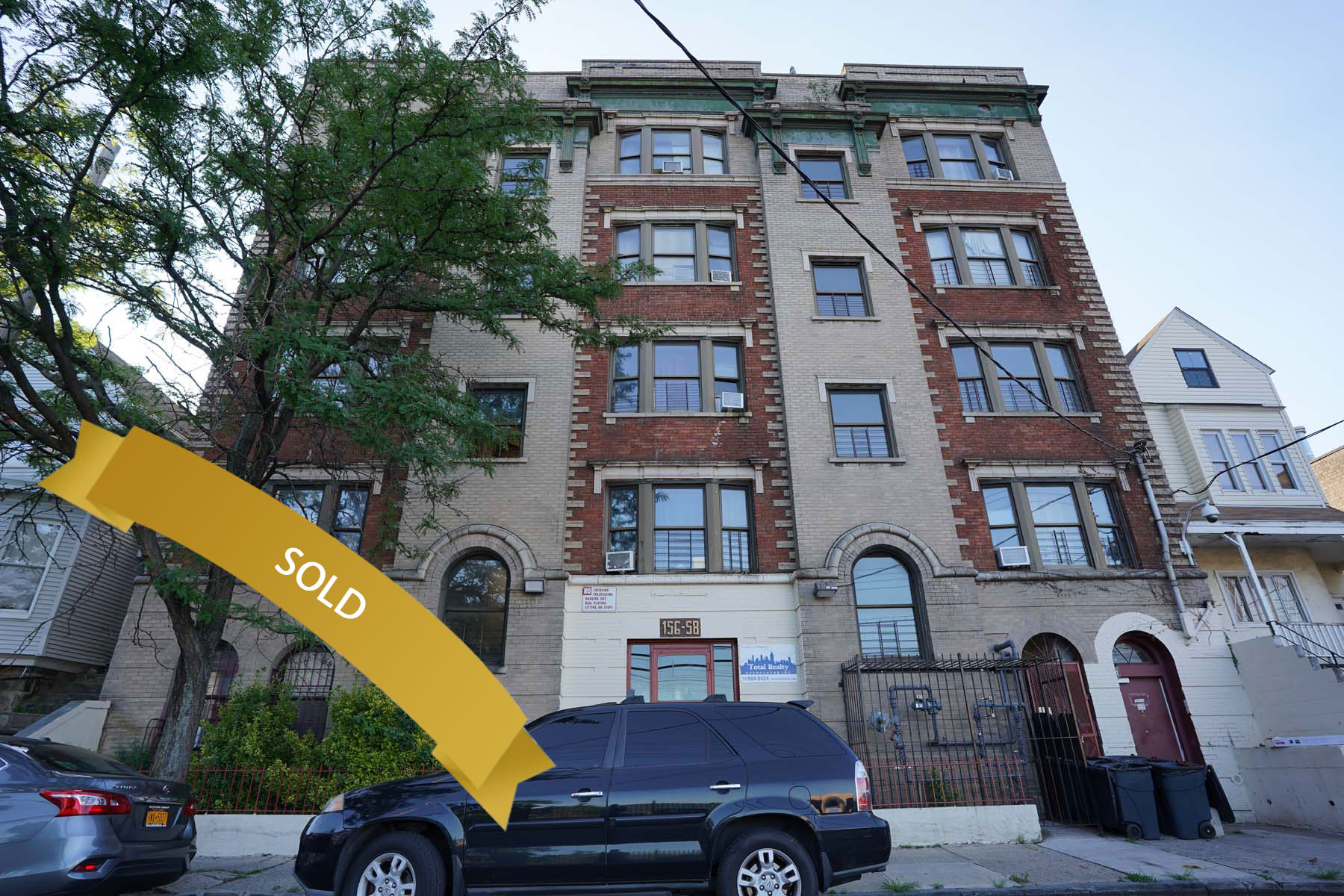 Note: This was a very opportunistic deal which provided the buyer with rental growth in a striving Yonkers environment replete with plenty of development activity by the waterfront. NEWARK, NJ; and YONKERS, NY — March 10, 2021 — Oren M. Levin-Waldman, Socio-Economic Research Scholar opens the broadcast day in discussion of his most recent essay, “The Real Consequences of Globalization that Nobody Discusses”.  From 10-11am EST. 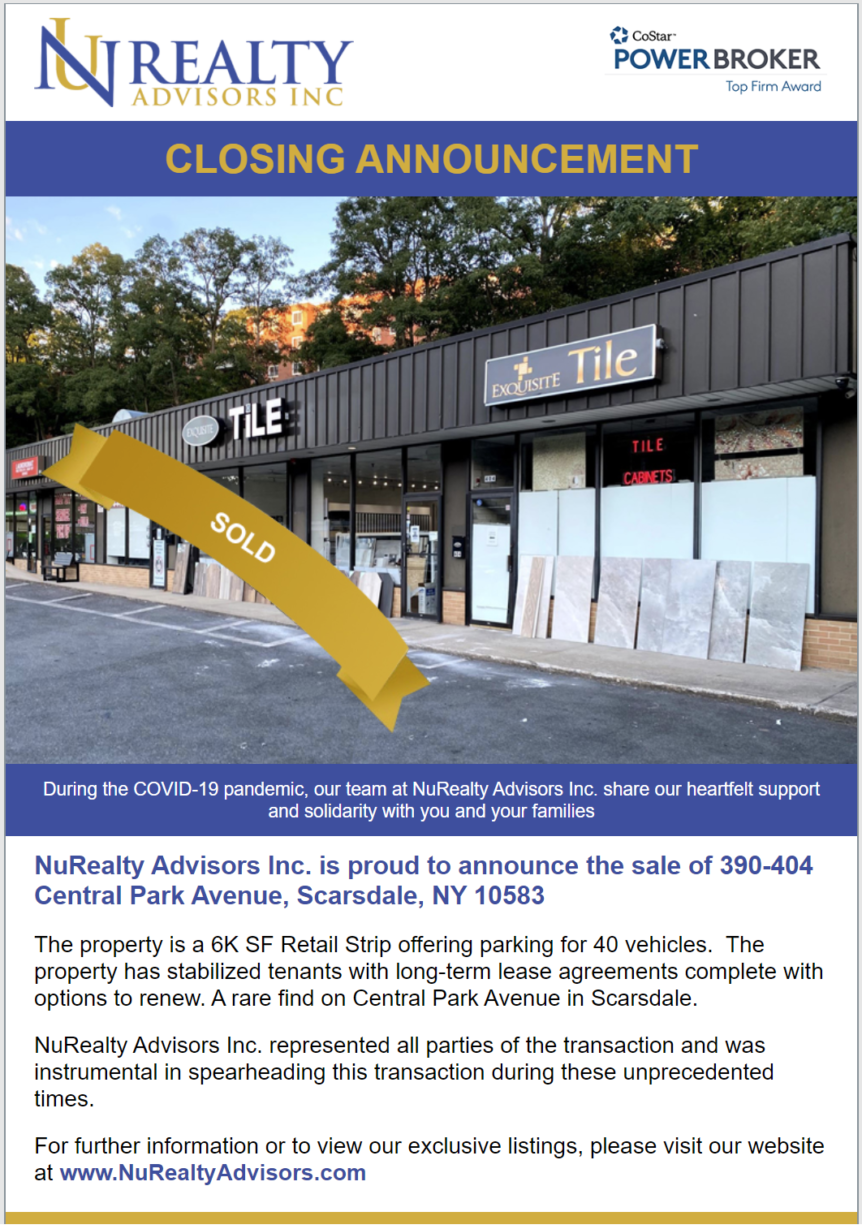 SCARSDALE, NY and YONKERS, NY — March 6, 2021 — NuRealty Advisors Inc. has sold 390-404 Central Park Avenue, Scarsdale, NY 10583.  This was a 6K SF Retail Strip with approximately 40 parking spots.  NuRealty Advisors Inc. represented both sides of the transaction and closed this deal during the Covid pandemic.  Challenging times to sell real estate in New York as many investors are worried about the New York Real Estate market following the decline in Multi-Family valuations due to the Rent Reform Law of June 2019 and challenges of Covid.

END_OF_DOCUMENT_TOKEN_TO_BE_REPLACED

OSSINING, NY, and YONKERS, NY — May 22, 2020 — Ossining Mayor  Victoria  Gearity opens the broadcast day. We discuss the prospect of a nation and state financially bereft and devoid of the mechanisms to seemingly shepherd its citizenry due to a lack of financial capacity by its citizenry. How can Ossining manage its finances? Can people hold out from paying rent to their landlord, whether for their residence of business? Is a legal transition being contemplated? If so, how long before it can be implemented? It not, then what? From 10-10:30am.

Mike Nukho, Founder, President and Principal Broker of NuRealty Advisors, Inc., a Commercial Real Estate Brokerage Company, and a Partner of GEM Management Partners LLC, a Multi-Family Residential Property Management Company speaks to his Open Letter to NYS Governor Andrew M. Cuomo which was published on May 18, 2020 and entitled: A Balanced Approach: Stimulus Checks Are Deficient in Protecting Tenants’ Security and Rights, and it is certainly a remedy to the plight revealed by ProPublica’s reporter Alec MacGillis’write-up entitled Rent Is Still Due in Kushnerville. first published on May 21, 2020.

“Who’s Next?”, an Amazon Prime documentary feature by award-winning American filmmaker Nancy Cooperstein Charney follows six Muslim-American families as they navigate ongoing hostility and discrimination nearly two decades after 9/11. We learn the consequences 9/11 exacted on Muslim-Americans, and if societal response infers similar bias and bigotry onto others? Is America’s response to 9/11 an aberration specific to American sensibilities or one that resides in people aching hearts for generations? Has humanity yet been able to separate perpetrators from their religious adherence or their ethnic identity? How do people bridge that horror, lived or influenced by its telling? From 11-11:30am. 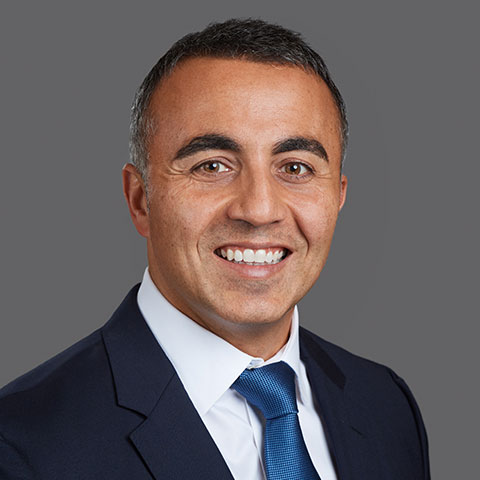 YONKERS, NY — May 16, 2020 — I am 100 percent on board to assist tenants as a result of the Coronavirus (COVID-19) crisis which has impacted tenants’ concerns vis-a-vis their anxiety level regarding their capacity to meet their monthly rent. Despite your concern and empathy regarding tenants, I suggest, with all due respect, that your approach does not meet the needs of tenants. END_OF_DOCUMENT_TOKEN_TO_BE_REPLACED

YONKERS, NY — May 11, 2020 —  117 Morris Street, Yonkers, NY 10705 screams “Location, Location, Location”. The mantra is the suggested valuation of property being developed and the logic and value of development for the developer and as well as for future residents. While value is an elusive concept the surrounding area is not a one off. A burgeoning consensus is validated and informed by other close by future developments in what is a very desirable and strategic location. Future development by the Ginsburg Development Companies (GDC), Ludlow Point, and 70 Pier Street, will offer a combined 550 rental apartments on the waterfront with views of the Palisades beyond the ebb and flow of the majestic Hudson River, and the convenience of Metro North commuting transport.

The transaction was procured and closed during the midst of the COVID-19 Pandemic. NuRealty dealt firsthand with the new complex changes of the financing environment and led this deal to a successful closing. The deal offers excellent returns and tremendous upside for the buyer. 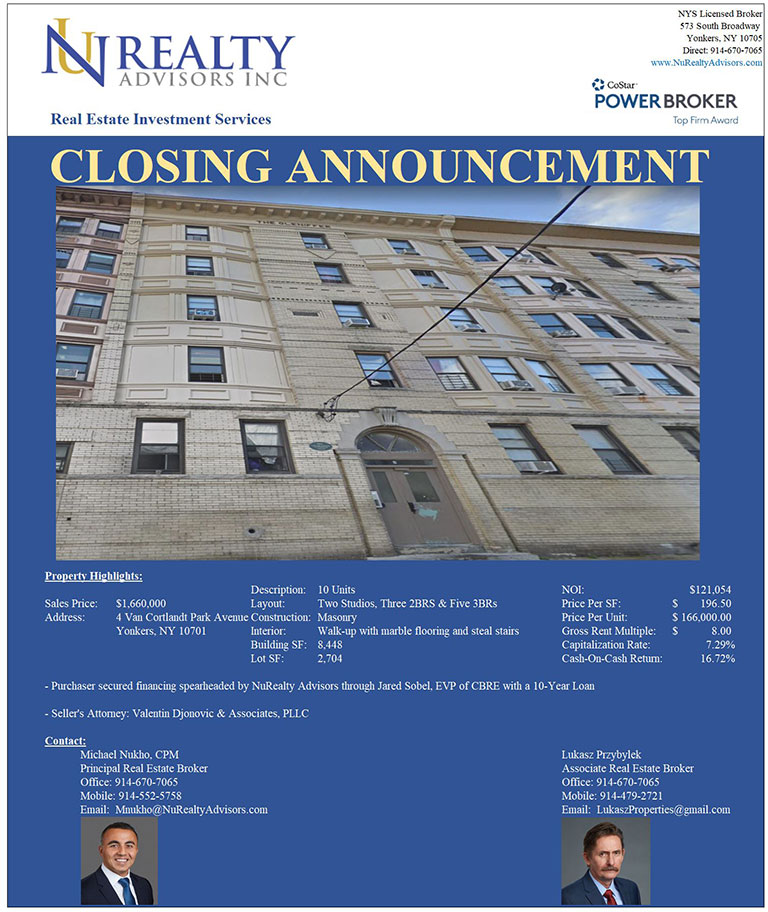 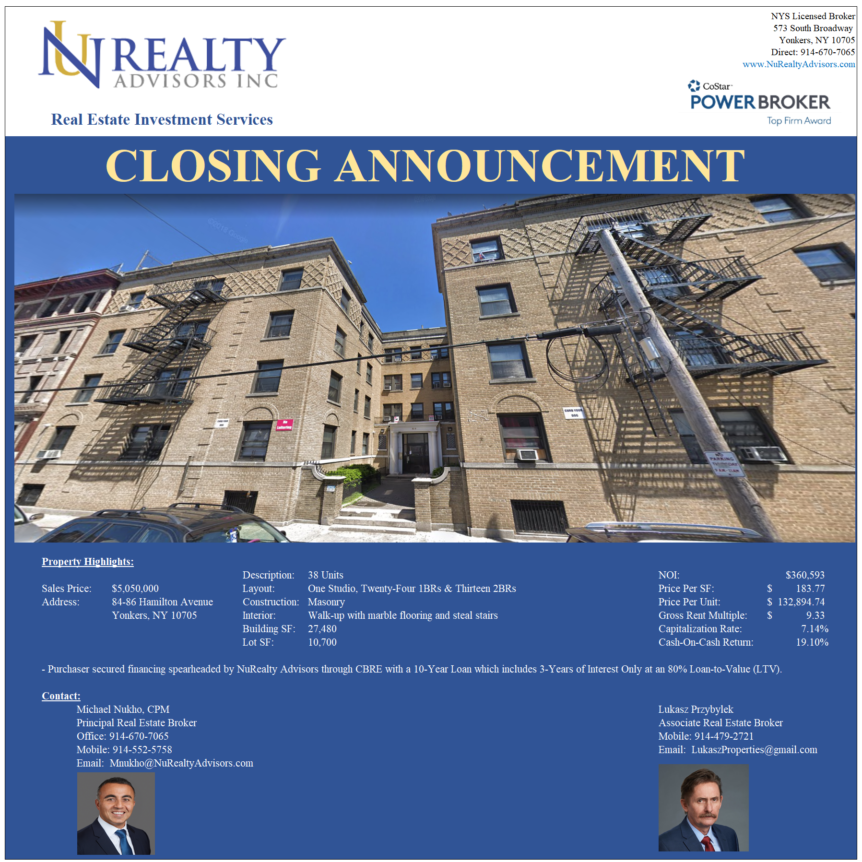 NuRealty Advisors Inc. Recently Brokered the Purchase and Sale of Property in the City of Yonkers

Michael Nukho, NuRealty Advisors Inc. Principal Broker said, ‘This was an extremely challenging sale as we began listing the property in November 2019. We experienced a downturn in the market both leading up to and post the 2019 Rent Reform Law which took effect on June 15, 2019. END_OF_DOCUMENT_TOKEN_TO_BE_REPLACED 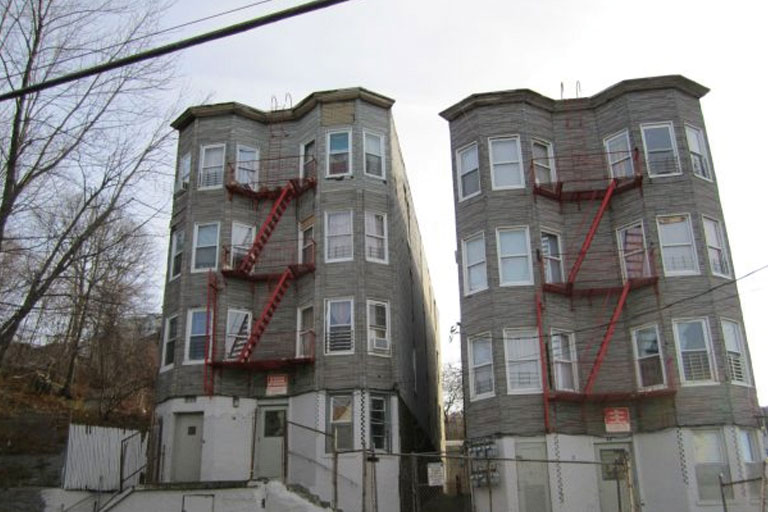 As national developers place their bets along Yonkers’ riverside and lure even more investors to the city, the eastern side of Yonkers tells a different story.

Mike Nukho of brokerage firm NuRealty Advisors, which brokered the sale of 14 units on Poplar Street in Yonkers, said the Nodine Hill neighborhood exemplifies the unevenness of the new investments happening in the city. END_OF_DOCUMENT_TOKEN_TO_BE_REPLACED

As Published on New York Citybizlist

As Published on New York Citybizlist

CBRE ARRANGES $8.0 MILLION IN ACQUISITION FINANCING FOR A SIX-PROPERTY MULTIFAMILY PORTFOLIO IN YONKERS 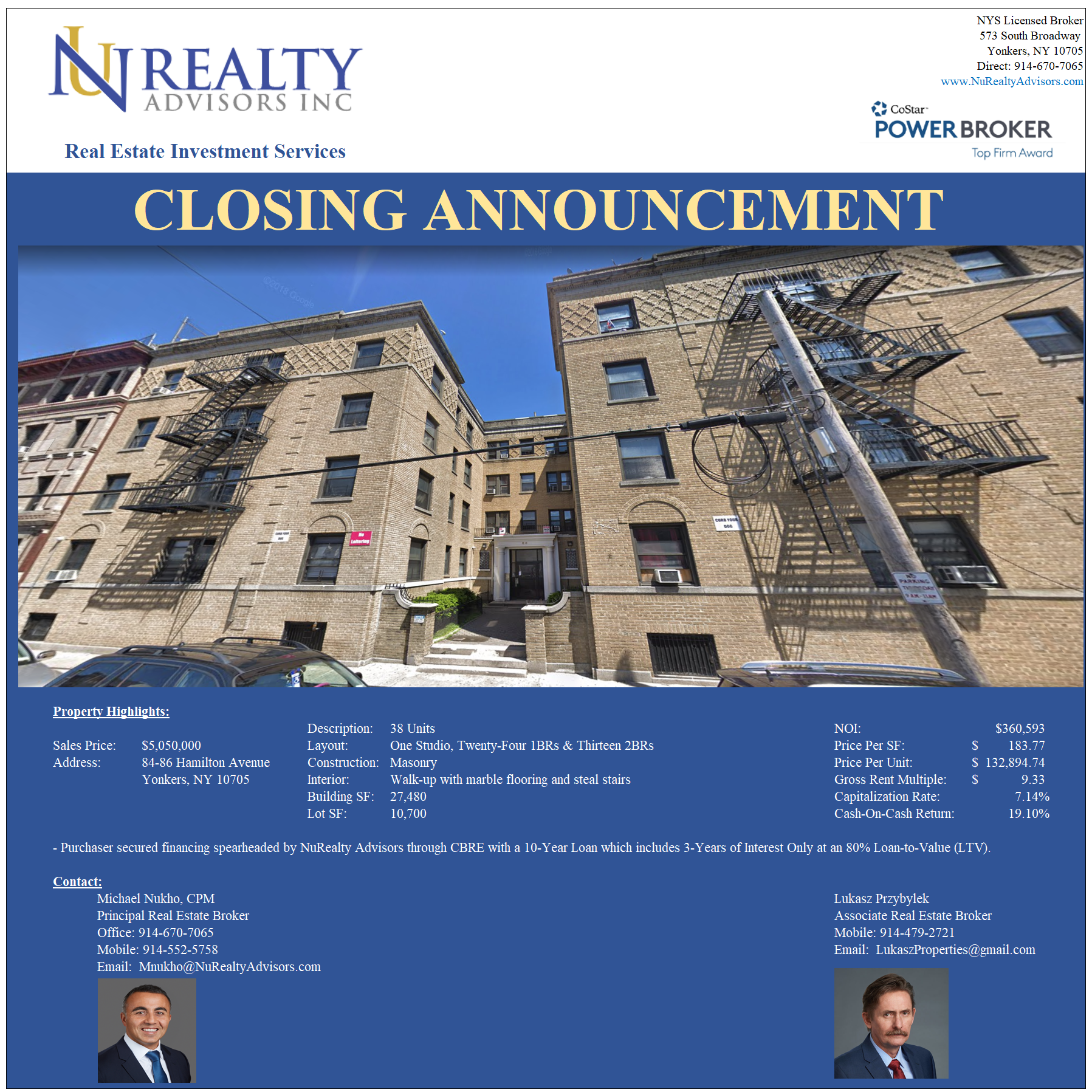 NuRealty Advisors Inc., managed by Michael Nukho (Principal Broker) and Lukasz Przbylek (Associate Broker) has been selected by CoStar Group, Inc. (NASDAQ: CSGP), the leading provider of commercial real estate information, analytics and online marketplaces, to receive a CoStar Power Broker TM Award. This annual award recognizes the “best of the best” in commercial real estate brokerage by highlighting the firms and individual brokers who closed the highest transaction volumes in commercial property sales or leases in 2016 within their respective markets. END_OF_DOCUMENT_TOKEN_TO_BE_REPLACED 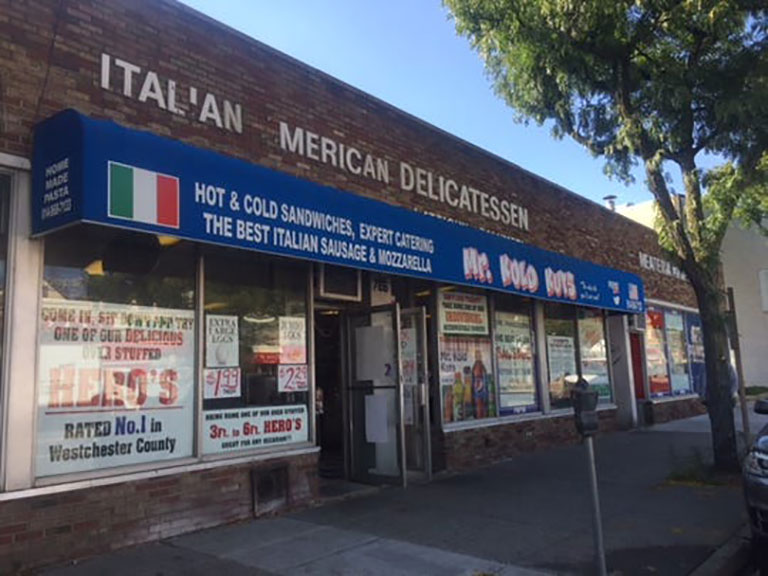 NuRealty, a Yonkers-based brokerage, said the trend is evident in the sale of the 22,735-square-foot retail center at 778, 786 and 790 Yonkers Ave., located one block from the casino.

END_OF_DOCUMENT_TOKEN_TO_BE_REPLACED

Michael Nukho was born and raised in Yonkers with over 500 Yonkers apartments under the management through GEM Management Partners LLC, he and his team has represented purchasers and buyers for over $100M worth of closed transactions in Yonkers since 2016 through NuRealty Advisors Inc (brokers).

END_OF_DOCUMENT_TOKEN_TO_BE_REPLACED 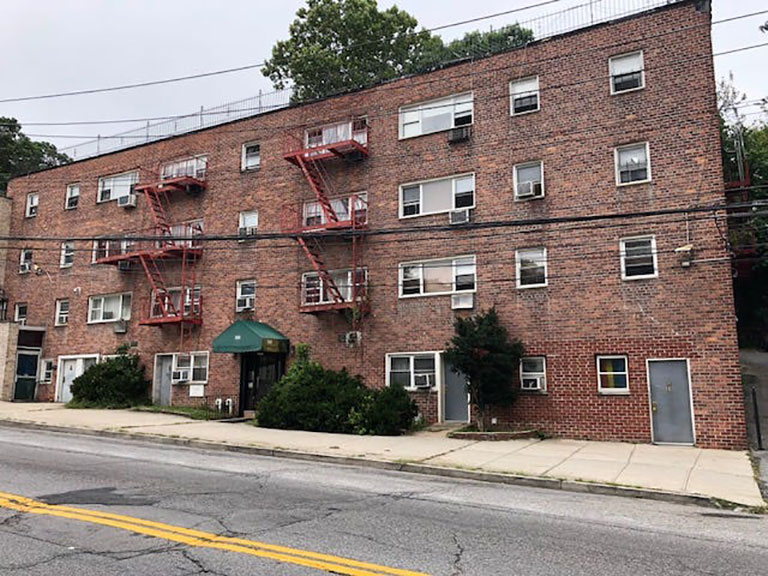 One of the recent examples was the $5.5 million sale of the 34-unit apartment complex at 376-380 McLean Ave. END_OF_DOCUMENT_TOKEN_TO_BE_REPLACED 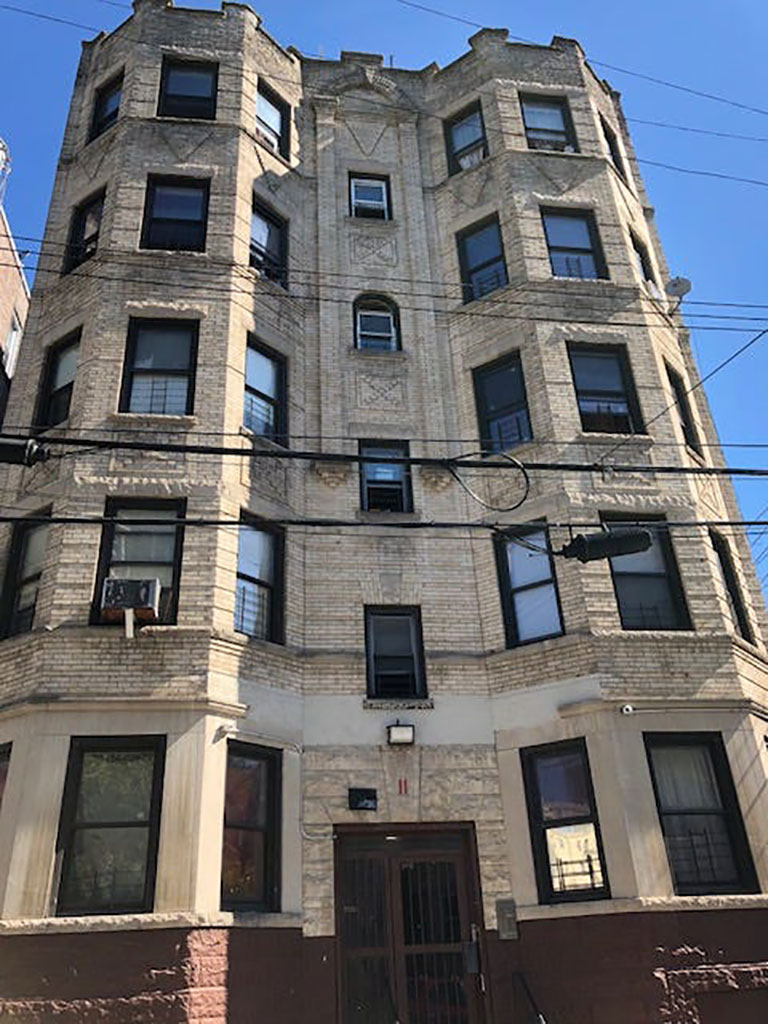 YONKERS – An 11-unit rental apartment building on Lawrence Street has been sold for $2.2 million.

The seller was Lawrence St Yonkers LLC, and the buyer was 11 Lawrence Street LLC. END_OF_DOCUMENT_TOKEN_TO_BE_REPLACED 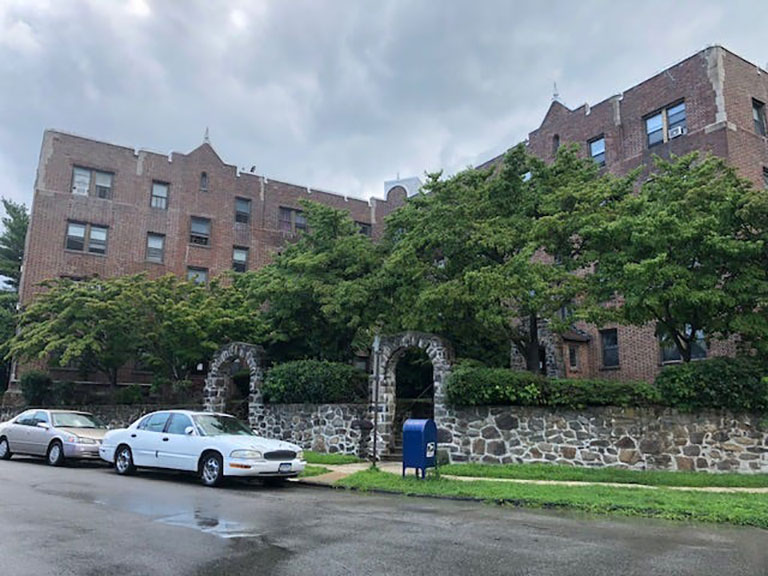 NEW ROCHELLE – A 25-unit rental apartment building on Stonelea Place has recently been sold for $5.05 million.

Michael Nukho, principal real estate broker with NuRealty, along with the firm’s associate broker, Lukasz Przybylek, represented both the seller, Spadea Inc., and the buyer, Stonelea NR LLC., in the transaction. END_OF_DOCUMENT_TOKEN_TO_BE_REPLACED 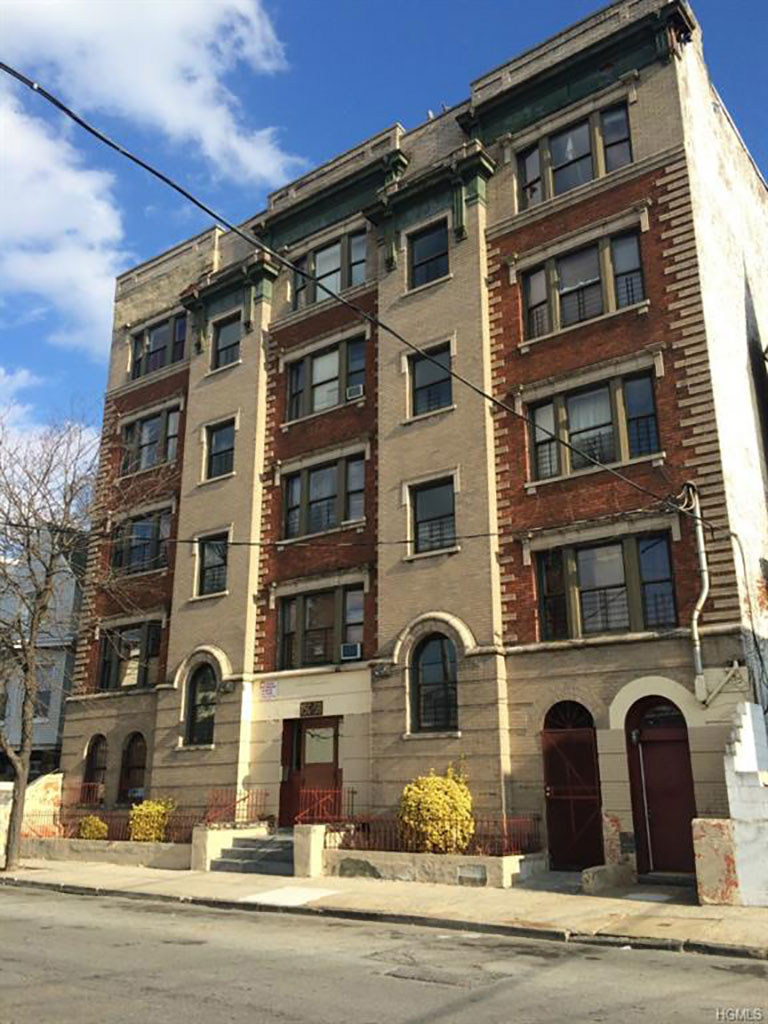 8 apartment buildings in Yonkers sold for $12.3M: ‘Yonkers is on the rise,’ broker says

Note to readers: The Journal News/lohud will lift the paywall from lohud.com on Tuesday, Nov. 6, and Wednesday, Nov. 7, so that all readers may access election coverage and sample content on a variety of topics. We invite everyone to enjoy this free access for two days and then consider subscribing so that you can stay informed on local news from Westchester, Rockland and Putnam counties. END_OF_DOCUMENT_TOKEN_TO_BE_REPLACED 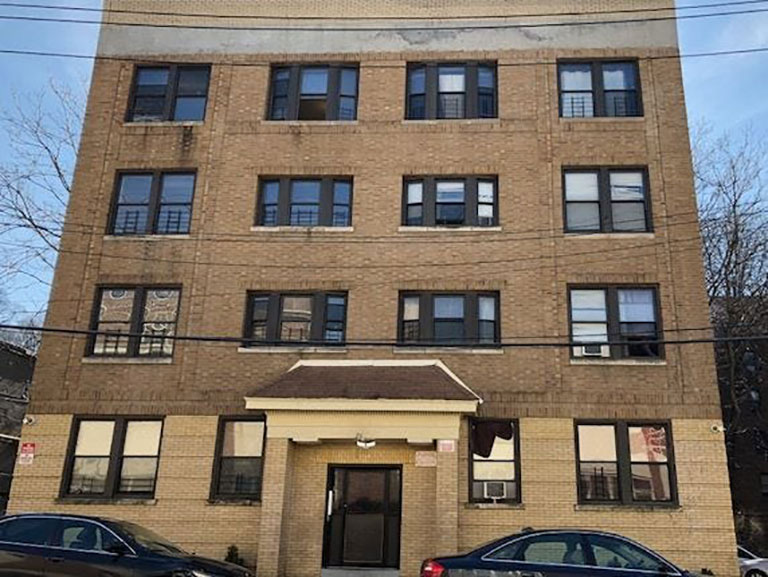 YONKERS – Two rental apartment buildings on Rollins Street have been sold for a total of $6.3 million, according to a real estate broker who was involved in the recent deal.

Request a Call Back